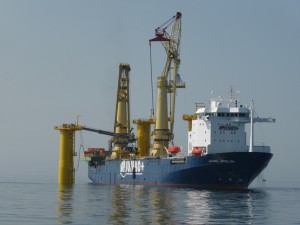 The monopiles are manufactured in Rostock at the manufacturing yard of the Erndtebrücker Eisenwerke. The transition pieces are pre-fabricated also in Rostock and assembled in Lubmin. The components are shipped from the two harbours to the project site for installation.